Born in 1967, lives and works in Suresnes, France

Hervé Jézéquel has been putting time, chaos and entropy at the heart of his personal research since his beginnings. “The work of time; ruins and photography” was the subject of his dissertation for his Master’s Degree in Science and Technical Studies in 1990.

Walking and travelling, scenery and place, limits and borders… are at the centre of his reflections and his photographic work. It is not so much a question of showing the confusion that one observes on the surface of the earth but rather searching out, finding, imagining the primitive state of the world, of which man has lost the memory and the markers.

At first he concentrated on the representation of a ruin in photography, architecture of confusion and desolation with an underlying feeling of melancholy.

Little by little, it was the material itself, in particular stone and water, which became the subject of his observations, with their shape and their roughest shapelessness. From a picturesque view of the world, his eye turned to the sublime view of a more mysterious nature, harsh, rugged, which in one way defies one by its strength and vastness (ocean, desert, landscape after catastrophe) and makes man confront a landscape in which he searches for his place. He is particularly interested in the loss of one’s bearings, disorientation, and the complex relationship which man has with nature (the elements), as expressed in his series “Unnatural landscapes”, “Materia prima” or “Composed waters”.

There often emerges from his pictures an undifferentiated perception of the world, which enables him to make visible a “banal” to which we no longer pay attention, minute details of the world, moments in which is felt the presence or at least the imprint and the traces of our passage. Hervé Jézéquel takes damp, sandy, stony paths, between shadow and light, his gaze, on the edge of a void, observing the abyss in a spiral. He also pursues, with insistence, the work of deciphering the landscape and place, seeking out its history and its purpose. He studies its anthropisation, the relationship and fluctuating balance between nature and culture. From places such as islands, rivers, torrents, mountains and forests, he builds his series of photographs based on a topographical vocabulary which is his surveyor’s tool: locate, list, classify, name, fix setting, collect up, extract.

Hervé Jézéquel often works slowly and takes several years to produce a set of photographs. He observes landscapes and his images are indicators for him in places where man often feels lost. Close to an overbalancing of the memory of the world or in limbo of it, he feels he is in a poetry of space, of geography and of changing scenery, where his expression now conjugates with other mediums: video, design, writing, in situ installation.

His work is imbued with his interest in ancient photography, geology cartography, which has led him to collect and accumulate traces, documents and stones from the places he observes. As his approach is on the border of art and science, he has also taken part in numerous ethnographic projects or acted as curator of exhibitions in galleries and museums.

He enjoys the company of authors he is fond of….. His literary references are, among others, Italo Calvino, Jorge Luis Borges, Gaston Bachelard. He likes quotations, which he often uses as a counterpoint to his pictures, as for instance: “I am the point where I am”…..” I am the geometric point of all contradictions” – Paul Valery. 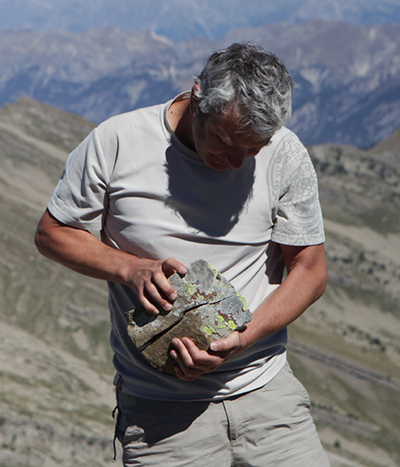 Hervé Jézéquel works with a 4 x 5 inch or 6 x 6 cm camera with analogic films. The black and white prints and the colour proofs are produced by himself or in a laboratory overseen by him. Some of these pictures could be produced by ink-jet process on archival paper with pigment ink.

All the photographs presented on this website are available for purchase. They are protected by copyright © Hervé Jézéquel. They are, in most cases, printed by the author in limited editions, signed and dated